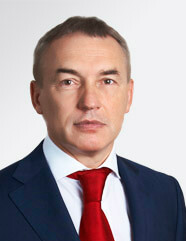 Victor A. Trigubko has been a member of Mechel PAO's Board of Directors since June 2016 and CEO`s Adviser since February 2022.

From 2006 to 2020, he was the Senior Vice President for Government Relations.

Previously, he was Vice President for Government Relations from 2005 to August 2006.

From 2002 to 2003, Mr. Trigubko was the Director of Mechel International Holdings AG’s representative office in Romania.

From 1993 to 1997, he held various executive positions in the metallurgical company Unibros Steel Co. LTD, including Deputy General Director.

Mr. Trigubko also worked in the Foreign Relations Department of the USSR State Committee for Labor and Social Issues and in the USSR Trade Representation Office in Romania.

Mr. Trigubko has a degree in economics from Kalinin (now Tver) State University.